Following Katie's lead, the gang rolls into a karaoke joint in Xinxiang City and makes a scene.
More info on M4 in China Premier in Portland, go here for tickets:
hollywoodtheatre.org/marchfourth-marching-band-in-china/
Video by Diggable Monkey
diggablemonkey.com
Posted by Diggable Monkey at 9:05 AM No comments: 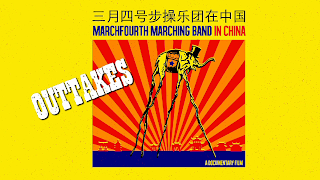 
Ryan's impressed by the chimes encountered while at the Henan Museum.
More info on M4 in China Premier in Portland, go here for tickets:
hollywoodtheatre.org/marchfourth-marching-band-in-china/
Video by Diggable Monkey
diggablemonkey.com
Posted by Diggable Monkey at 9:06 PM No comments: 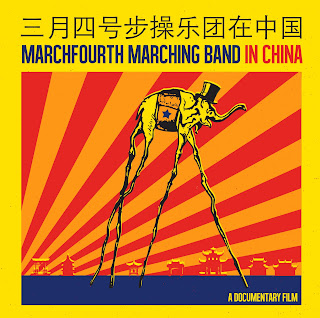 In May of 2013, MarchFourth Marching Band was honored to do a US State Department cultural exchange tour in China, sponsored jointly by the United States Embassy in Beijing, Sias International University, Sias Foundation, and the Government of Henan China Cultural Affairs. This film traces the band's path through Henan, a relatively remote province of China often referred to as the "Cradle of Chinese Civilization," as they present an American musical experience in concerts, workshops, parades and civic events, promoting peace and goodwill through art and the common language of music. The freaky and urban MarchFourth juxtaposed against Henan's traditionally more rural community not only reflects an unusual slice of modern Sino-American relations, but also provides a unique glimpse into a part of China that most Americans don't see.
Posted by Diggable Monkey at 8:42 PM No comments: 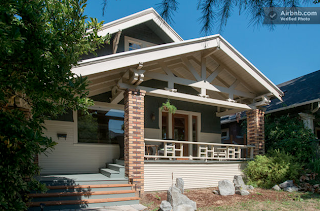 Before I bought my current place around 10 years ago, I spent a few months at my friend Benjamin's house in SE Portland. He's since bought the place and rebuilt it up over the last couple of years. It's now available for renting by the day and has really incredible value - especially for small groups of visitors or family who may be visiting Portland for a short spell. If you know anyone looking for a spot to call home for a couple of days, I'd highly recommend this house. Now if I can just convince him to let ME have a retreat there...
Posted by Diggable Monkey at 1:48 PM No comments:

MarchFourth in China Documentary COMING SOON!
In April, 2013, Portland's MarchFourth Marching Band was honored to receive an official invitation to do a US State Department cultural exchange tour in China, which was sponsored jointly by the United States Embassy in Beijing, Sias International University, the Sias Foundation, and the Cultural Affairs Office of Henan's Provincial Government, in Zhengzhou. The band had performed overseas before, but this tour was bound to be different. This was Asia and a trip into rural China, where freaky foreigners like us rarely travel, let alone an 18-member rock band performance spectacle! Americans seem to love our act, but would the Chinese? Though we were somewhat confident they'd appreciate our cultural offering, we really had absolutely no idea what we were in for. This is our story...
Diggable Monkey Productions ©
http://diggablemonkey.com
Posted by Diggable Monkey at 2:02 PM No comments: 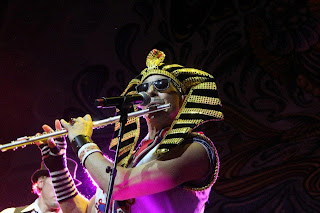 It's our music video release party! The video, which was filmed in at the Bossanova, features special guests Russell Bruner, the Swingtime PDX dancers, Kazum, Noah Mickens, Leapin Louie, and more! We couldn't have made the video without them! The very first screening ever will happen at the Bossanova Ballroom, followed by a MarchFourth show, plus DJ GlobalRuckus. 21+. Doors open at 7:00 pm.
Posted by Diggable Monkey at 10:02 AM No comments: 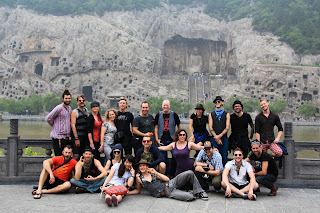 STATUS: Well, we've been at this editing on the project for about a month now. Lots of material to go through, lot's of stories to shape up! We've been going through the library of files looking for little vignettes, more interview material and sifting through Jake Wood's beautiful photographs. The other day, we acquired some great music material from MusicLoops. Love that service. So many great compositions on there! We found what we were looking for and a lot more. We're designing the timeline to create a film that runs in the 60 minute range to get it in the "full feature" category for film festivals. RELEASE DATE: It seems the Hollywood Theater, in Portland, is keen to have us premier the film with them. As it stands, we're looking at a December 1st date. More on that as we get closer to the "official release". We'll be sending the film to replicate hard copies for our Kickstarter donors by late October, which will be a limited run made primarily for our financial backers. The longer range plan is to release the film online and make it accessible through the band's website. FILM FESTIVAL: We're targeting SXSW as a primary film festival submission. There are other opportunities to show the film at other festivals, of course. SXSW seems to be a good fit, however. The band hasn't played the festival since March of 2011 and will not likely be back to play, barring some weird twist of fate. We like the scene in Austin, but festival itself didn't seem to yield much for us. We enjoyed ourselves at the festival, but perhaps the film can represent the band this next time around. Thanks for your patience as we get this amazing story ready for your to enjoy. It's looking really good in pieces. Can't wait to start pulling into a longer thread. Cheers!
Posted by Diggable Monkey at 12:16 PM No comments: 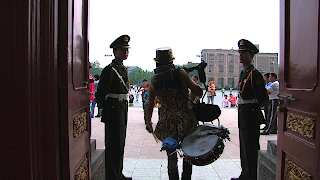 We're excited to announce that the Kickstarter project has officially been funded as of this morning! The fans are excited to see this story through, as evidenced by the donations made through crowd sourcing funds. We've been sitting on a mountain of raw material and have also worked to tease out more interview material from band members since we've been home. For the next six weeks, the documentary project will be the primary focus of DM's time. We're planning to have a good draft by the end of September. Here we go!
Posted by Diggable Monkey at 11:00 AM No comments:

Submitting Film to the WTF? 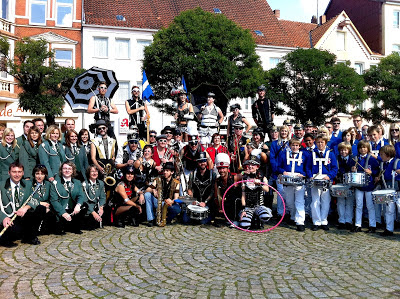 Submitting a copy of the MarchFourth in Germany film to the WTF? folks through Festhome (www.festhome.com). Hope they find it interesting enough film to play at their music festival this summer. For more info on WTF?, check out the website here: http://whatthefestival.com/
Posted by Diggable Monkey at 12:07 PM No comments: 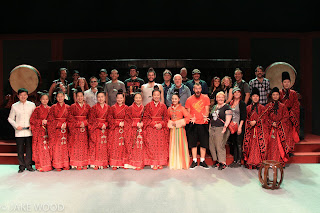 Happy March 4th of July! What better way to celebrate the American way of life than checking out our new Kickstarter campaign to fund a documentary about our cultural exchange tour to China. Please share the news! And be safe out there today.
Posted by Diggable Monkey at 10:23 AM 1 comment:

Going deep into the Chinese mainland to Henan province. MarchFourth's recent diplomatic tour there was financed by the US State Department and the cultural ministry of the Henan provincial government.
Posted by Diggable Monkey at 12:43 AM No comments:

A Little Shindig at Wapato There's a picture perfect unused jail in North Portland that will make a fine backdrop for the music video shoot today. It's not the first place I dream of spending my time on a rainy Monday morning. In this case, we'll be in the company of the fine friends from the colorful Wanderlust Circus. The cats from Perception Northwest have really been rocking the production. Our location shoot last week at the Bossanova Ballroom with the entire band cast was super sweet. The finished piece ought to be a real zinger for the MarchFourth Marching Band. Stay tuned...
Posted by Diggable Monkey at 9:37 AM No comments: 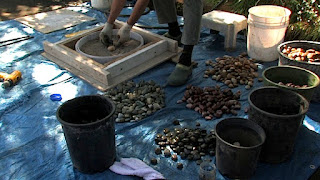 Diggable Monkey is super pleased to be working with Jeffrey Bale of Jeffrey Bale Gardens. Jeffrey is a renowned garden designer and landscape architect with a special interest and skill in custom stone mosaics. Jeffrey is developing a series of videos to be released later in the Fall. From Jeffrey's website: These gardens are built using organic principals, ensuring a cleaner environment. I have become known for my work with pebble mosaic, an art form of unlimited expression and practical application. I am moving away from the use of wood, as it becomes increasingly scarce, and into the fantastic potential of steel. Ancient or Modern, I am not limited to any particular style other than the goal of creating something of great beauty that fits harmoniously into it’s surroundings. For more on Jeffrey, visit his website: http://www.jeffreygardens.com/index.html OO OO!
Posted by Diggable Monkey at 3:45 PM No comments:

MarchFourth Marching Band from Portland, Oregon, USA, is embarking on a US State Department Cultural Exchange Tour in China, sponsored jointly by Sias International University, Sias Foundation, the United States Embassy in Beijing and the Government of Henan China Cultural Affairs. MarchFourth’s 18 performers (and 3 crew, including cameraman/documentarian Kevin Balmer of Diggable Monkey) will tour the Henan Province of China, putting on shows at universities, arts centers and public squares from May 21-June 3, 2013. Since the Cold War era, trips like this to developing and/or communist countries have long been part of American cultural diplomacy efforts to showcase the American arts and, by extension, our way of life. Some of the first musicians to tour the world on the US State Department dime were jazz greats like Louis Armstrong and Duke Ellington. Though these programs declined somewhat in the second half of the 20th century, they were revived or ­reinvigorated after 9/11 in an attempt to downplay anti-US sentiments around the world. 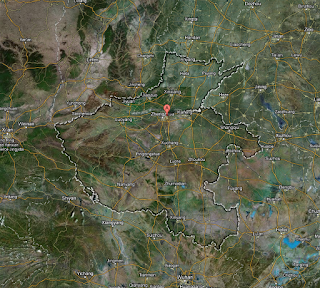 Posted by Diggable Monkey at 2:56 PM No comments:

Here are a few of the shots Aaron Rogosin took from Threshold Black Water Snake. 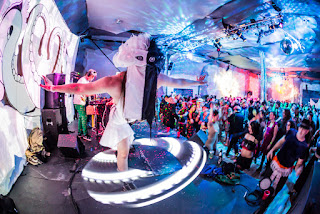 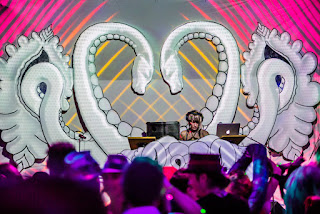 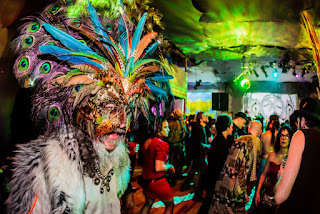 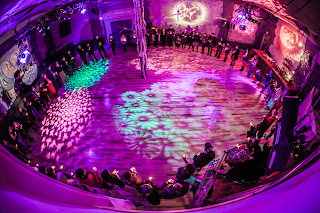 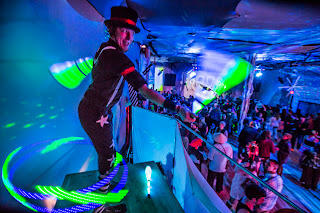 Posted by Diggable Monkey at 8:21 AM No comments:

Two years of work explained in less than 4 1/2 minutes. Here's how the story goes at light speed...
Posted by Diggable Monkey at 10:13 AM No comments: 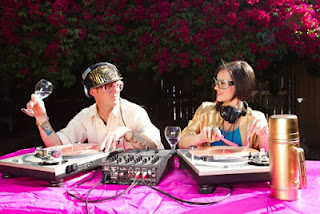 The Black 22’s are are not just DJs, but Good Vibe creators. No two Black 22’s sets are the same and endless hunting for new tracks keeps their sound fresh for them and their listeners. The two are connoisseurs of high energy, dance floor activating music. Both J*Labs and Lou E. Bagels have a deep passion for DJ-ing and each brings their own flavor into the mix. When combined they bring a bass heavy funky dirty genre-busting party vibe that keeps the dance floor bouncing. Hitting the decks with a colorful, playful vibe Black 22’s deliver every time. The two also actually share a birthday, 2/22! But Lou E. Bagels had already come up with the name “Black 22s” before they met, it’s actually based on a roulette bet! They’ve played several notable venues and festivals including: Electric Daisy Carnival (EDC), PEX Summer Festival, Lucidity Festival, Lunacy Festival, Burning Man, Elysium Festival, Boogaloo Mountain Jam, Lightning in A Bottle,Vanguard, King King, Dim Mak Studios, Supperclub LA and many others.
Posted by Diggable Monkey at 3:23 PM No comments:

Shawna's passion for music began in early childhood while attending the Winnipeg music folk festival in Manitoba, Canada, where she grew up. There, she was exposed to musical genius from all over the planet, which greatly refined her ear for the subtleties and origins of all types of music. It wasn't until the age of 18 that she took an interest in electronic music, and began pursuing Music of just about every genre, crafting the art of spinning it all together in a smooth hot mess of the dance journey, while simultaneously always searching for that same quality of depth, fun and life in the electronic realm. She's been dj-ing "out" since 1999. Played next to many a known name such as: Bassnectar, Mimosa, Glitch Mob, Beats Antique, Marty Party, Miguel Migs, Moderat, Heyokah, Mochipet, Freak Nasty, Tipper, Antennae, Lowriderz, etc. The list goes on and on and on. Member of El Circo, and has a musical project with Zoe Jakes-(of Beat Antique)- called Pussymonster. She plays for the dancers!!!
Posted by Diggable Monkey at 3:47 PM No comments:

We are blessed to have the support of a great community asset such as KBOO FM.
Posted by Diggable Monkey at 10:43 PM No comments:

Posted by Diggable Monkey at 3:06 PM No comments:

Posted by Diggable Monkey at 1:43 PM No comments: