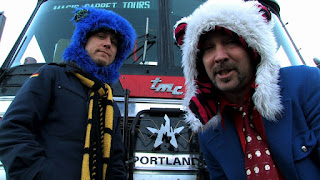 Your favorite intergalactic marching band, MarchFourth, needs a new space ship! Our beloved bus, Razzle Dazzle, is getting old and she ain't what she used to be. Razzle's not very gas efficient and spews more exhaust than we'd like to admit... and she broke down three times last year! (though amazingly we never missed a gig =) Without a reliable ride, we can't get to your town to rock your face off.

http://www.kickstarter.com/projects/MarchFourth/razzle-dazzle-20-the-marchfourth-bus-project?ref=menu
Posted by Diggable Monkey at 9:26 AM No comments:

February 20, 2012 -- A Life with Razzle Dazzle video diary with MarchFourth from the road. While in Bend and Eugene, Richard and the gang fire up the crowd with pleas for support of the Razzle Dazzle 2.0 Kickstarter campaign.

The Day the BORG Was Impaled On My Unsecured Rebar 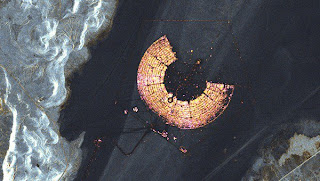 The following is an essay that I wrote and posted to my personal profile concerning the Burning Man organizations (BORG) attempt to re-organize ticket distribution for the 2012 event. The most obnoxious aspect to the whole affair is the lack of foresight (and apparent lack of insight) concerning the ticket lottery systems disruption to the basic organizational structures of "theme camps" and the art projects that they support. The situation is not all that surprising given the festival organizers do nothing more than review "applications", assess various credentials and requirements and then place what appear to be legitimate camps in some logical orientation on the city map. Indeed, if Robert Moses were alive today he would covet this unbridled control over the hyper engineered social landscape.

The BORG has done right by many festival participants over the years, but continues to fall short in the eyes of many involved with producing camps - or tribes, as I refer to them below. These tribes are the critical flesh and muscle sitting on top the infrastructure bones assembled by their highly functional (and mostly subsidized) public services crew counterparts (DPW, BRC Rangers, Man Crew, Arctica, BMIR, etc).

Apologies, I don't offer much in the way solutions in this letter. I'm pretty sure they'll get a hold of me though if they really want my input.

Against my better judgement, I'm going to say a few things about the above tirade. First, this isn't about ME not getting a ticket in the lottery. In fact, I already have another opportunity through a close friend, which ironically I will pay less than what I was offering to pay myself... After all this debate, I wonder whether I even have the stomach to go! This thread is meant to be more about my personal perspectives on severe blows to my notion of the tribe. I'll use the word tribe rather than community because the word suggests specificity in both composition and scale. All the magical contraptions aside, to me "tribe" is the heart and the soul of the event.

Through the years, I've met lots of "solo journey"- type people on the playa that sing of their unattached personal freedoms while at the event. Frankly, I've never been that person. Instead, I prefer the more complicated group dynamic of shared commitments, agreements and accountability while playing monkey in the mad house. The comfort and care we can and often do provide for one another at the tribe (camp) level is crucial. Indeed, perhaps some of the most revealing experiences one has at this festival are personal exchanges between members of our tribes. Let's be honest, your romance with the giant slinky in deep playa is fleeting. The place you rest your head and call home is not. We depend on the sanctity of knowing our tribe is vigilant, aware and looking out for us. These are the qualities we spend years developing, implementing and maintaining. My 5 consecutive years with the "little Puzzle that could" still feels like an accomplishment, knowing full well that the average shelf life of a theme camp is more like one to two. I left the playa last in 2008, but full of hope and aspiration that I might once again return with a solid crew of playa warriors; fit and able. I thought that 2012 might just be that time. Now I'm not so sure.

While I'm sure the vast majority of camps coalesce around the last two months of the summer, the most solid ones are a year round affair. You absolutely cannot throw groups of people together on the Playa and expect things to function properly. People need to know one another somewhat to anticipate and react to situations, whatever they may be. If you were working with the 80+ Mobile Groove Bomb crew at the American Dream, then you know precisely what I'm suggesting. When you put a commander in the field with a set of fresh recruits, you cannot get the same results as you would if he had his trusty veterans on point. The successes of MGB on the playa that year both as a mobile installation and a physical camp had EVERYTHING to do with experience and familiarity.

As Pirate Ship Andy Tibbets has already eloquently described in his message to the Portland Burners, there isn't a whole lot of hope for restructuring a functional work/living environment when a lot of your experienced people have been made to fight even harder than they already do to be a part. I won't speculate on a macro level what this might do to the event at large, but on a micro level - on a camp level - it leaves me feeling uncertain at best about on how to proceed. For me, it has very little to do with the idea or argument that it's important to forge new relationships. Look, I get that. I've been forging relationships all along. My disdain for the current situation has much more to do with the notion that some jackleg Super Being came in pissy one day and fired all my employees without any consultation. Yeah, it hurts. It feels disrespectful, dishonest and downright asinine.

As a tribe leader, I'm rather unwilling to expose myself and others around me to the myriad of complications that arise in the difficult environment that is a blustery salt pan desert in rural Nevada. I feel as though I've spent enough time in the trenches developing the requisite thick skin and I can tell you with certainty that I'm long out of the training business. Can I put my energy and focus in some other area? Well, of course... to what end? Spend another decade forging skills that end up getting tossed out with the bath water? Doesn't sound too appealing. I'm sure this rant comes off ugly, self-righteous and very "un-burner"-like. Sorry, but I know my tribe and I also happen to know that they've got my back on this one.

Regardless, if I'm extremely lucky (not hard working, but lucky), I very well may see some of you out there in August. Barring some miracle, it's not likely you'll see me in my element. I'll be on a solo journey, running light and without a lot of backup...

Damn, Lighteekevee just doesn't seem to have the same ring.