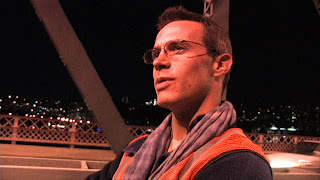 June 21, 2011 -- If you live in Portland and you've ever had a hand in event production, then you probably know the workings of William de Richter Heintz. We got to know him better working together over several months on last summer's PDX Bridge Festival where he functioned as an event coordinator. Sadly, Richter passed away this past week leaving us to grapple with a tremendous sense of loss. We are indebted to him for his relentless efforts to bring so many communities together here in our city.

For the record, Richter never called on me to film him - though he never shied away from the camera when approached either... Argon introduced me to him when he first moved to town. Over the next 3 years, I watched him blossom into the event work that he really passionately loved. As a biographer, it was his spirited tenacity that was most interesting to me. While working on the Bridge Fest, he seemed to really be coming into his own. I took every opportunity to film him running around like a mad dog during the festival. It was both inspiring and RIGHT. 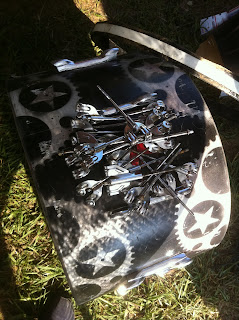 We just finished up at the Wakarusa festival in the Ozark Mountains. Met a lot of really great musicians down there who were totally excited about MarchFourth, including the sensational Quixotic from Kansas City. Holy smokes! Their stage show was one of the most impressive things I've seen done at a festival.

The M4th stage performance at the Revival Tent on Saturday was a scorcher, but we managed to play a pretty decent show. There's nothing like having room to move around and not step on one another. Richard's tom rig can be a challenging to play at times.

Aside from the fact that we had our camp posted up at the recycling dump, we managed to stay alive by staying under shade where possible. On to Tennessee to play Nashville, after which this monkey gets off the bus and heads south to Atlanta for some quality time with the folks. More behind the scenes clips with the band are coming. I need a new Firewire cable to get the media off the tapes!
Posted by Diggable Monkey at 2:38 PM No comments: